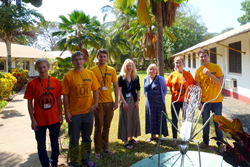 of the MRC’s Centenary year. The students involved were Beth Coe, Thomas Elliot, Alex Clark, Richard Morter, Jack Bibby, and Megan Chasey. All embraced the experience, and Thomas even designed the centenary t-shirt. They were also introduced to MRC Chairman, Donald Brydon, when he visited the unit for the centenary celebrations.

The students were invited to join the organising committee and run stations for the open day which formed a central part of the celebrations. 150 children from 15 local schools attended. Richard and Thomas served as microphone runners at a high-profile ‘Ask the Experts’ event which featured a distinguished panel of guests. The event was attended by over two hundred people.

Alison Offong, Head of Communications at the MRC Gambia said:

“Richard and Tom ensured seamless operations on the night!”

Tom and Beth were honoured to attend the Directors Award Dinner, held at Professor Corrah’s house. They were seated at the MRC Chairman’s table and had a very enjoyable evening. Beth said:

“It made it us feel part of the MRC as a whole and it was such a privilege to be given the opportunity to get involved. Meeting the local school children and their teachers made us feel that we belong and that the work we are doing is so worthwhile.”