One of the most exciting recent developments in genetic technology is called CRISPR/Cas9: it allows scientists to precisely alter the genes of virtually any organism. This technique makes it possible to investigate diseases in new ways, by changing enzymes and other proteins and exploring the consequences. Scientists have now used CRISPR to produce a mouse in which a gene called PRCP, which is involved in a range of diseases, no longer functions. 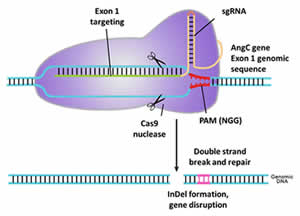 PRCR is an enzyme that turns the hormone angiotensin II (Ang II) into angiotensin 1–7 (Ang 1–7), which in turn blocks Ang II. Increased Ang II activity is strongly associated with the onset of hypertension, atrial fibrillation and diabetic mellitus. Some patients with hypertension have a mutation in their PRCP gene; this mutation has now been imitated in the PRCP-CRISPR mouse. This animal model provides a unique tool that will enable scientists to understand how a single gene mutation can lead to multiple cardiovascular and metabolic diseases in humans.