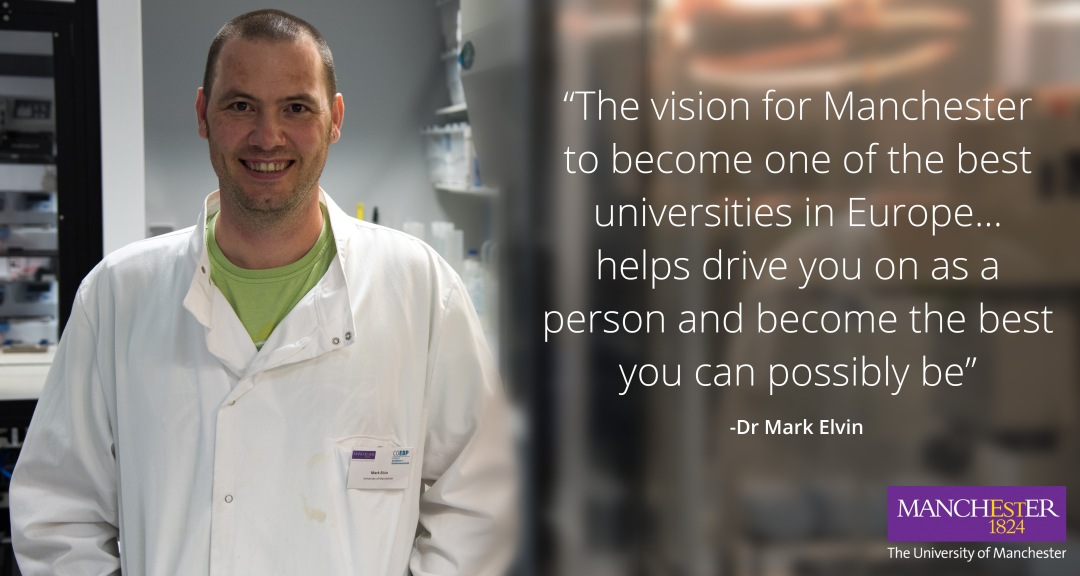 Dr. Mark Elvin works in the Robotics Lab here in the faculty (yes, it is as cool as it sounds!). In this week’s Tuesday Feature he talks about how his research could help 3rd world countries, his science heroes, and his new found love for swimming! 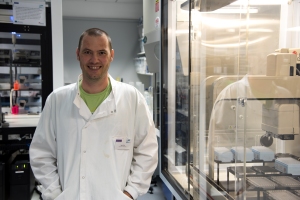 Can you explain your research for the layman in 10 sentences or less?

I have two main roles in the Faculty of Life Sciences. I run the Robotics Laboratory in the COEBP (Centre of Excellence in Biopharmaceuticals) on projects that include the development of new medicines with increased stability and greater shelf life, a factor that eliminates the need for cold storage and aid delivery of life-saving medicines across the world. In addition, I also work on basic research in Professor Alan Dickson’s lab.  My primary area of basic research is understanding how mammalian cell cultures that are used to produce new medicines can be grown more easily and to higher numbers (meaning more product can be harvested from each process with cost-savings for industry and patient).  I do this by profiling the efficiency of use of nutrients (metabolites) in the liquid medium used to grow cells using sensitive analytical technologies (e.g. Gas Chromatography-Mass Spectroscopy). Basically what that means is we look at various mammalian cells growing in different types of cell culture media and work out what the cells are utilising in the media and how we can use different types of media more efficiently to produce an increased amount of medicines.

How can your research benefit the general public?

I suppose by knowing more about the biotechnology industry and its manufacturing processes from the very beginning – from developing cell culture media for specific mammalian cells right through to developing the various cell lines – basically then to producing the recombinant proteins or antibodies that people will routinely get from their GP and Doctors. So, the need to eliminate cold storage is quite important, as I said previously, especially for the 3rd world where these facilities are not available. So if we can help create newly formulated drugs by exploring new formulation technologies through robotics then that will benefit everybody worldwide.

How did you first get interested in your area of research? 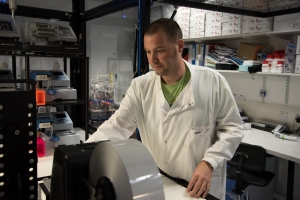 I’ve been working for Professor Alan Dickson in the biotechnology sector for about 18 months now. However, I have worked as a post-doc in the faculty since 2002 both in the labs of Dr Christian Heintzen (working on fungal circadian biology) and Dr Gino Poulin (RNAi screening in C. elegans).  Alan has very close ties with industry, good collaborations with many industrial companies and I’ve always been interested in mammalian cell culture from an early stage, reading the literature on the first cell line (the HeLa cell line) and all the ethical debates that have gone on since that, so that’s probably when I first got interested in it.

Did you have any science heroes growing up?

Yes, with studying general biology at both GCSC and A-level the earliest ones are generally the classical ones that you read about in science books. So for me, firstly is Alexander Fleming and his accidental discovery of penicillin, and secondly is Edward Jenner and his pioneering work in the development for the worlds first vaccine for Small Pox. Then going to University and studying molecular biology and learning about techniques such as PCR (the inventor of PCR being Kary Mullis, the Australian Surfer guy). However the reason I got interested in science and becoming a scientist/biologist was because of the seminal work of Sir Alec Jeffrey’s, the British geneticist and pioneer of DNA fingerprinting and DNA profiling. I would say he is probably the stand out person for me in wanting to have an academic career in science in a university-based environment.

How has working in Manchester helped you?

It’s helped me develop a great deal – not only as a person, but also academically as well. The vision for Manchester to become not only one of the best universities in the country, but also in Europe means they recruit the best people and being a part of that helps drive you on as a person and become the best you can possibly be. I think working in Manchester has helped me develop fully into the scientist that I am today.

What do you do outside work?

Outside of work I am a family man. I’ve been married for just over 10 years and we have 2 boys, aged 5 and 3. So, most of my time is spent at home with them. But also, I like reading and playing golf when I can get onto the course. I used to play football at the weekends but I have recently started swimming again before work at the Manchester Aquatics Centre, so my main passion now is swimming