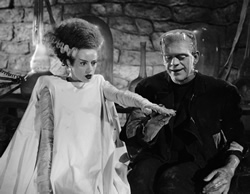 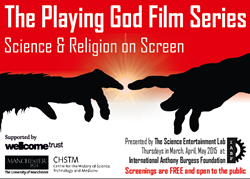 A unique and fascinating film series kicks off in Manchester on March 5, bringing together the diverse themes of religion and science.

The Playing God Film Series will explore the portrayal of these subjects in six classic movies. Each screening, showing at the Anthony Burgess Foundation across March, April, and May, will be introduced by an expert speaker and followed by a panel discussion.

The events have been organised by the Science and Entertainment Laboratory, based in the Faculty’s Centre for the History of Science, Technology, and Medicine. Dr David Kirby explains the thinking behind the series:

“We wanted to look at all six films in a new and different way, asking fresh questions about the content and challenging audiences to consider the nature of, and connections between, science and religion.”

The films are free to attend and booking is not required. All screenings, listed below, start at 18:30:

5th March: The Bride of Frankenstein

The film will be introduced by the science studies scholar Dr David Kirby.

With an introduction by film scholar Professor Mark Jancovich.

16th April: Planet of the Apes

With an introduction by filmmaker Sean Martin.

With an introduction by historian Dr William Macauley.

With a list of such controversial and at times genre-defining films, the discussions surrounding the Playing God Film Series promises to be fascinating. You can follow the conversations using the #PlayingGod hashtag on Twitter.

One thought on “Playing God in Manchester”