The Beast Within: an update

The Beast Within was a collaboration between the Manchester 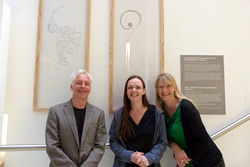 Immunology Group (MIG) and artist Paul Evans. The original exhibition, which saw a series of drawings of microscopic parasites on human scale displayed in The Manchester Museum, was part of Manchester Science Festival in 2012. MIG have now negotiated with Paul so that they can keep four of the images on permanent display in the AV Hill Building. The pictures chosen tie in with research currently being undertaken by members of MIG, MCCIR, and Computer Sciences.

Paul used microscopic images of the parasites to create the graphite drawings. By drawing the parasites on a scale clearly visible to humans, he was hoping to emphasise the contrast between the strange beauty of the organisms and the horrific nature of their impact. Infections caused by such parasites affect almost three billion people worldwide. Research undertaken at MIG and MCCIR looks at how these parasites affect the immune system and what can be done to better manage and treat such infections.

MIG regularly study one particular parasite; the gut dwelling whipworm known as Trichuris trichuria. Around 1 billion people are infected with this worm, most commonly in humid tropical countries in Asia, Africa, and South America. The infection occurs when people eat food that has been contaminated with parasite eggs found in the soil. Symptoms include malnutrition and stunted growth. They are the single most significant reason that primary school aged children miss out on education. Interestingly, though, species of the same worm are currently being used in clinical trials for the treatment of inflammatory bowel disease.

Dr Sheena Cruickshank researches the role of these parasites in human health, including the ways they can benefit their host. She welcomes Paul’s use of these creatures for art:

“The final images that Paul has produced are incredibly striking. They provide the public with an opportunity to see these creatures in a way that isn’t possible without a microscope. We hope they will make people think about the impact of these parasites and their significance for human and animal health.”