Rare Orchid Flowers in the Quad of the Michael Smith Building 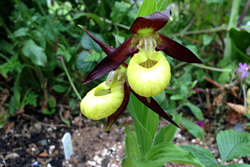 the Faculty’s very own Michael Smith Building. Though never a common plant, the Lady’s Slipper Orchid Cypripedium calceolus was reduced to a population of just one plant in the 1980s, mainly due to the attention of plant enthusiasts and herbarium collectors. The plant was rescued by a conservation project at the Royal Botanic Gardens, and has since been propagated and reintroduced at a number of sites. It is still extremely rare, though, and should not be missed while it’s flowering on our grounds.

The flowering of this orchid will be of particular interest to the plant scientists among us. MPhil student Oliver Hughes has found it especially helpful as he is currently studying the associations of orchids and fungi and hoping to discover ways in which this symbiosis can aid in the further propagation of these rare British flowers.

Lady’s Slipper Orchids are a fascinating plant. They attract bee pollinators by deception, imitating other woodland flowers and producing fragrances which are similar to bee pheromones but offer no nectar reward. Once attracted, bees enter the opening of the yellow slipper or labellum. A combination of the shape, the slippery interior surface, and the placement of transparent windows, helps to guide the bee to exit via a narrow corridor where pollen sacs are deposited on the insect’s back. If the bee blunders into another Lady’s Slipper upon exit, the pollen is deposited on the stigma and pollination occurs.

This particular plant has been grown from seed using sterile propagation techniques on artificial media. The plants are very slow growing, taking 5 to 10 years to reach flowering size. They are also very sensitive to disturbance, so to see the orchid flowering in the quad is quite an achievement. Orchids are among Britain’s most spectacular wild plants, and although there are around fifty species in the UK, roughly a third of these are threatened. The Faculty is proud to have such a rare plant growing on our grounds, and we’re happy that our students may play an important role in their preservation.